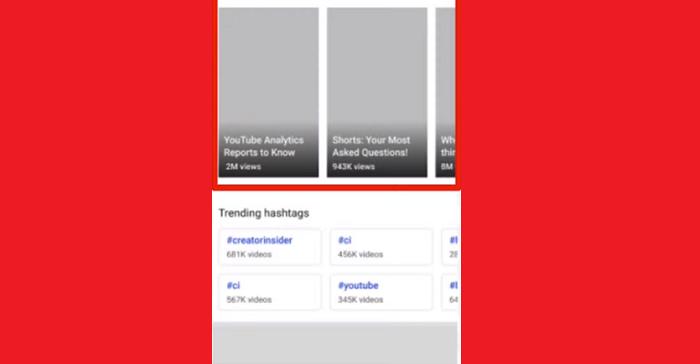 As it strives to address the trend of short videos, YouTube has announced the addition of a new Shorts shelf view on the Trending page, which will highlight the best performing Shorts clips, in your region, at any time.

“We have launched a Shorts shelf on the Trending page which will showcase the most popular shorts by location. Short videos will be filtered from trending results and will instead appear as a shelf. The goal here is to improve the user experience from the Trend page. »

As you can see in the example, the update will focus more specifically on the most popular Shorts clips, which should help drive more traffic to the most important content.

It will also help you with your research efforts and help you understand what people in your target market are watching on Shorts. And given the growing popularity of the option (short clips have already surpassed 5 trillion cumulative views), it could be a good way to keep an eye on the pulse and develop your own Shorts approach in the app.

In addition to that, YouTube is also rolling out new Shorts tabs on desktop, tablets, and the web, which will give users more ways to interact with Shorts clips.

Until now, only the mobile app had a dedicated Shorts section, but again, with the option’s growing popularity, YouTube is now looking to integrate Shorts into all forms of the app.

Despite TikTok’s continued growth, YouTube remains the biggest threat to its continued success, with its more advanced monetization process functioning as a key lure for creators who may eventually feel constrained by TikTok’s more limited lucrative options.

On TikTok, creators rely on its Creators and E-Commerce Fund or brand partnerships, but on YouTube, creators can use Shorts to complement their main channel, which then brings more people back to their longer content, in which they can sign. for in-stream and pre-roll ads to monetize their work.

In other words, on YouTube you can get paid, consistently, just for being a creator, while on TikTok you may need to move on to other forms of sponsored content or product endorsements to generate at roughly the same income levels.

This could become a key sticking point, and while TikTok is still establishing other forms of monetization, YouTube is likely already stealing some of its top talent with its more advanced monetization structure.

Shorts may not be as good as TikTok, but as an additional way to drive traffic, that may not matter in the end.

YouTube’s new Shorts shelf in Trending is rolling out to users in the US, UK, Canada, Australia, Brazil, Germany, India, France, Indonesia and MENA, with other regions to follow.