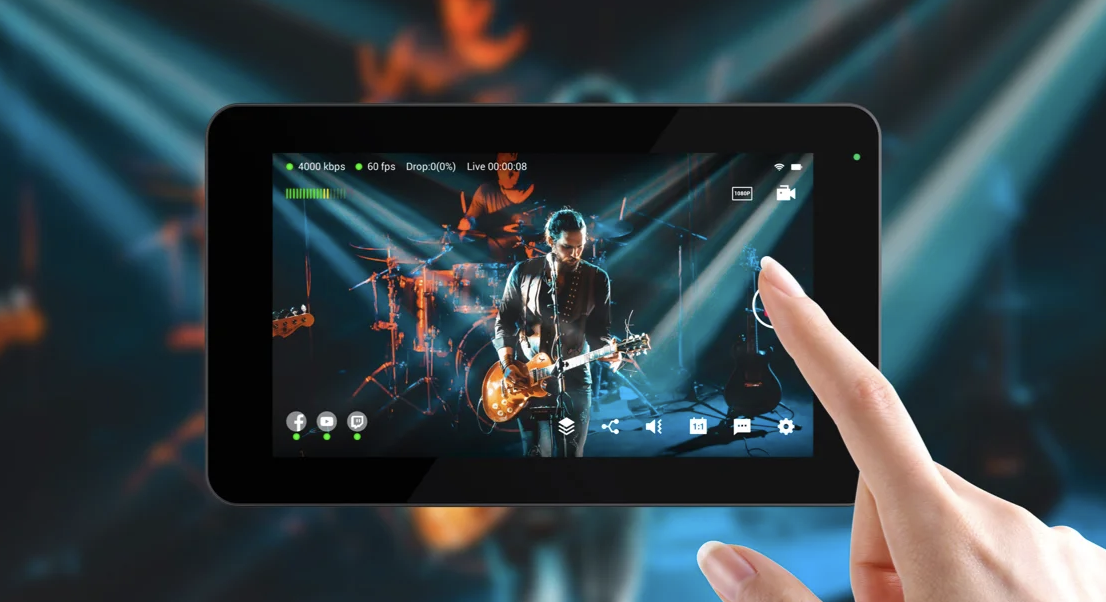 The YoloBox Mini All-in-One Smart Live Streaming Encoder and Monitor is essentially a central hub that allows you to record from your camera while streaming live from virtually anywhere without need a computer.

So how is it streamed live? The YoloBox Mini can simultaneously stream up to three video streams via Wi-Fi, Ethernet RJ45 or 4G LTE with a SIM card and subscription available separately.

The YoloBox Mini is ideal for streaming from a single camera or when connected to the output of a switcher, as it will not only encode and stream, but also add graphic overlays so you don’t need to a computer. You simply connect your video input to HDMI or USB 2.0, then connect to a local network via Wi-Fi, Ethernet or LTE (LTE connection requires SIM card and data plan not included). It also has an HDMI output to display your stream locally on an optional HDMI display. The YoloBox Mini supports input resolutions up to 1080p60 and can stream to YouTube, Twitch, and other streaming services via custom RTMP presets.

You can save your stream directly in MP4 format to an optional SD card of up to 1TB using the built-in SD card slot.

Now, you must be clearly aware that there are two different versions of the YoloLiv YoloBox Mini Ultra-Portable All-in-One Smart Live Streaming Monitor and Encoder. One model, the EM version, will work over Ethernet and Wi-Fi anywhere in the world, but it only supports 4G LTE outside of the US, Canada and Mexico. If you’re in the US, Canada, or Mexico, you’ll need to purchase the non-EM version which will give you 4G LTE capabilities in those regions.

You can customize your live stream by adding logos/watermarks/drop-down captions. Custom options, including Interview mode, let you bring a unique look and feel to your stream and you can interact with your audience in real time via commentary overlays. There is a customizable dashboard feature that can display a real-time controlled dashboard and you can also use built-in lower thirds templates.

Now the biggest caveat for me is that the YoloBox Mini does not have any type of battery plate and it has a 4700mAh internal battery. Yes, you can power it or charge it via USB-C, but that’s not ideal if you’re using it on a small camera. YoloLiv doesn’t seem to indicate anywhere how long the internal battery lasts.

Matthew Allard is a multi-award-winning, ACS-accredited freelance cinematographer with 30 years of experience working in over 50 countries around the world.

He is the editor of Newsshooter.com and has been writing on the site since 2010.

Matthew is available to be hired as a DP in Japan or to work anywhere else in the world.

Consequences of not paying debts and loans on time