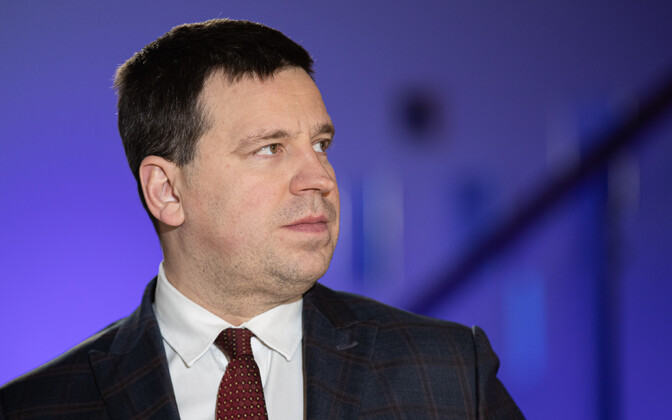 Ratas: Urgent need for solutions to the energy crisis | Politics

Ratas told ERR on Thursday that: “We need a quick debate and quick solutions, today. There is no time to wait for an analysis of what the measures will do, some of which have not not yet implemented.”

“It’s clear that people and businesses today need much faster solutions, they need such universal solutions,” solutions the Center had offered earlier in the week, Ratas added.

“We need clear, universal and bureaucratic solutions, so that individuals and businesses can get help quickly,” he continued.

Regarding differences on the issue between his party and his coalition partner, Reform, or with any of the three opposition parties, Ratas said he: people will get through this, whether companies have trust in tomorrow or there will be a wave of bankruptcies, in which people will start taking fast loans, which is by no means fair or sustainable.”

The debate on the issue is expected to take place in the coming days, Ratas added, while noting that a call by the conservative People’s Party of Estonia (EKRE) for a vote of no confidence (see below) would not mean that the Center would join him.

“The last point is that we see from this current energy crisis that we need clear, rapid, universal solutions, and that we cannot continue to refine.”

EKRE chairman Martin Helme told the ERR his party was considering a vote of no confidence in the government, a vote he said was more at stake than any other in recent years.

“Although we might think that a motion of no confidence is usually done to state a political position or to amplify a political position, this time we are talking about the possibility that the government will certainly collapse,” Helme said, at the occasion of the anniversary of the collapse of the Centre/EKRE/Isamaa coalition in which he was Minister of Finance.

“And the reason is not that the opposition won votes, that today’s government has proven itself incapable, and that inability is evident from every angle,” he said.

“It is abundantly clear to me that the discussions now taking place at government level can, at best, lead to roughly similar solutions, a case of too little, too late, or incomprehensible, or not at all, and everything what can go wrong there, will go wrong,” he continued.

“However, we will have to wait. In fact, the government still has a responsibility to solve the energy crisis and the crisis of people’s livelihoods. They have to offer something. If they don’t offer anything, they will have to withdraw, ” he continued, adding that if that did not happen, a vote of no confidence would see to it.

Helme also said there was serious polarization within the Reform Party over Kaja Kallas’s premiership, but did not put a number on MPs who oppose her or name a candidate who could potentially replace her without the party losing its position in power.

“And since [Reform] are very experienced politicians and have a very long history of political activity, they know how to hide very well [the split]; they all understand perfectly that this weakness and these internal divisions must not show themselves. As soon as they post this, it will become much more difficult for them to direct or control political processes in any way,” Helme continued.

Helme said the proposed motion will be dealt with next week, while the coalition may have another opportunity to present a new package to resolve the crisis.

Helme also said he was not speaking only for his own party, but also for the opposition, or at least their leaders, Indrek Saar (SDE) and Helir-Valdor Seeder (Isamaa), whom Helme said he spoke to and both of whom, he said, view the current government as a disaster of incapacity, many of whose members do not understand the scale of the current energy and inflationary crises, or how to handle the pandemic.

For the Centre, meanwhile, the danger is being somewhat chained to a corpse in the current coalition, which would see the party’s current 25 seats halved to nearly 15 in the next March 2023 election. Helme added.

Reform MP and councilor for Tallinn: I hope the party and the government consider other options

Kristen Michal, who heads the Tallinn City Council group, is one of the leading Reform Party members who has come to prominence recently in relation to the energy crisis. Reform is in opposition to Tallinn.

Michal told ERR, also on Thursday, that he hopes the Prime Minister will consider a proposal he made this week to provide one-time lump sum assistance to every pensioner and every family with children, in a bid to alleviate energy price shock.

An energy price cap, dubbed the Norwegian option after a country where the principle is used, could also be considered, he said.

“There are certainly those who say today’s mechanism is great, but I felt much more concrete action is needed,” Michal said.

“I also recommend that the subsistence mechanism be revised, both in its organization and so that subsistence rates take into account the price increase,” he added.

Ultimately, it was up to the leader of his party and head of the national government, he said.

“No one can dictate to the prime minister how to do things; maybe the Riigikogu give their opinion a bit, but let’s just say we gave our opinion,” he continued.

Michal added that the current situation is not temporary.

“If you look at the inflation figures, for example; last year it was just under 5%, whereas next year the figure will probably be higher. This price shock will actually continue, moving from electricity to food and other services,” he continued.

Nothing prevents the state, government or parliament from saying they have a better solution in mind than the current solution – including the Norwegian model mentioned above, which Michal said he asked the Ministry of Business economical to make calculations.

The emotional problem of people who were coping on their own until recently, now having to apply for help and the administrative burden of this help mechanism reinforce the need for a solution, he added.

At the traditional government press conference on Thursday, Kaja Kallas said that while the government had not yet made a decision on the support measures, it was ready to make changes to facilitate the current system.

Kallas noted on Thursday that the measure was designed for 380,000 households, or 800,000 people, while the total population is 1.3 million.

The local government is responsible for distributing up to 80% of the assistance on the energy bills of low-income households and has had to hire additional staff to process the applications.