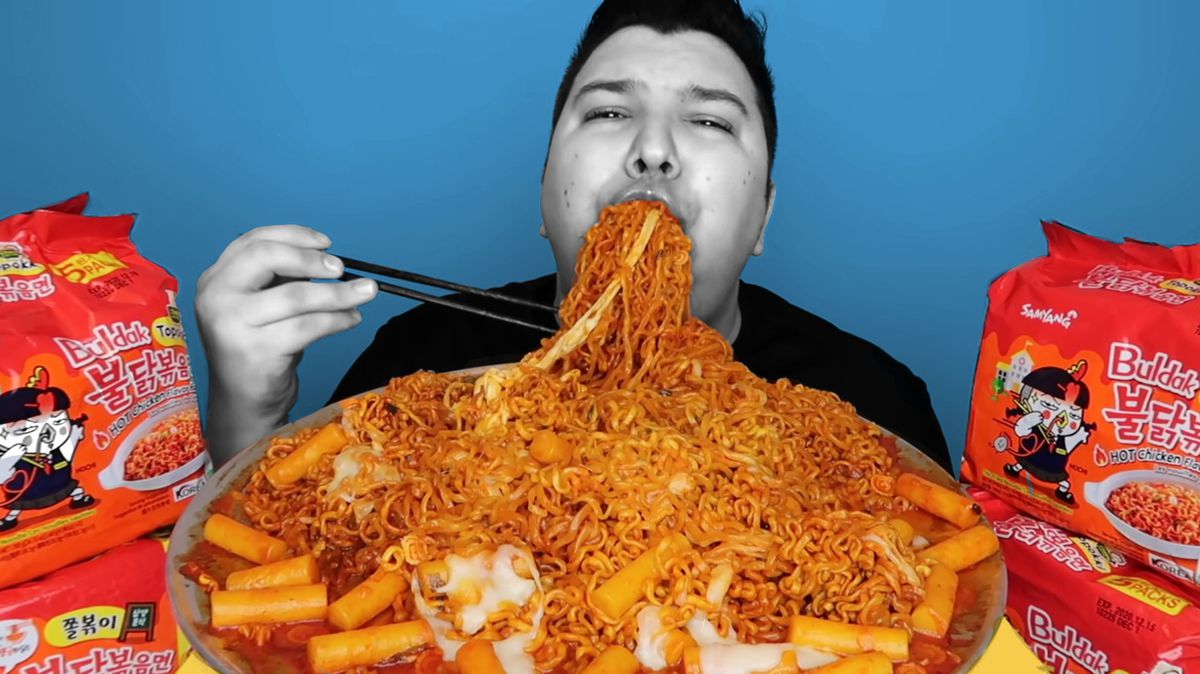 Nikocado Avocado: The YouTuber Who Gained 100 Pounds on Camera | Company

There are around 5.6 million people living alone in South Korea, according to data from Statistics Korea, the country’s national statistics institute. In 2010, something happened spontaneously on the South Korean streaming platform AfreecaTV: hundreds of young people began to sit in front of their computers and tell their daily life in front of the camera while eating. Dishes almost always colored with carbohydrates, and more and more. The spontaneous phenomenon was called mukbang, a term that combines the Korean word for “food” (muk-da) with “broadcasting” (bang-song). His triumph, almost instantaneous, is due to the feeling of loneliness of a large part of his society. Millions of people felt like someone was having lunch or dinner with them every day. And since loneliness is as prevalent as the love of junk food, the trend quickly spread to other countries around the world.

Watching someone consume thousands of calories in one sitting can be both fascinating and disgusting. Yet, as Sergio Barreda, CEO of Madrid-based influencer agency Keeper Experience, points out, “challenges have always worked, both on TV and on YouTube. Success lies in the interest that comes from watching strangers overcome a challenge, step out of their comfort zone and, along the way, suffer a little. Moreover, these types of videos have a humorous and entertaining connotation that makes viewers hooked. In this, American YouTuber Nicholas Perry, known online as Nikocado Avocado, has no competition. But there hasn’t been anything funny about his development for a long time.

Born in Ukraine on May 19, 1992, Nicholas did not have a happy childhood. As he told controversial YouTuber Trisha Paytas – the other big mukbang hero, with 2.2 billion views on YouTube – on The Dish With Trish podcast, baby he was adopted by a Pennsylvania family and “I was in and out of therapy”. since I was five years old. In that same conversation, he shared how much it cost him to process the decision his biological parents made to abandon him. And that as a teenager, he was diagnosed with OCD (obsessive-compulsive disorder) and ADD (attention deficit disorder).

According to his first Twitter account, between 2011 and 2012, he earned his living as a freelance violinist. His dream was to play in a Broadway orchestra, so in 2013 he moved to New York. I was vegan at the time and followed a healthy diet.

At that time, through a vegan Facebook group, he met a young Colombian man named Orlin Home. After months of talking, they met in person at the WoodstockFruitFestival, an event for raw vegans held annually in the city of skyscrapers. The crush was immediate. In early 2014, Nicholas put aside his musical aspirations and moved with him to the South American country. In their first official video as a couple, they claimed they only argued over food. It was the perfect prologue to what they became a few years later.

It was Orlin, who already had a YouTube channel, who encouraged Nicholas in 2014 to debut on the popular video platform. This is how Nikocado Avocado was born. In his older videos, still available on the Nikocado Avocado 2 sub-channel, he discussed both his workout routines with Orlin and the many benefits of veganism. Everything changed on September 1, 2016: on that day, he shared an article titled Why I’m Not A Vegan YouTuber Anymore, which currently has nearly five million views, in which for just over 30 minutes he called those who reject animal foods “unbalanced, hostile and mentally unstable”. He received a flood of comments, for example: “Here rests in peace the sensible version of Nikocado Avocado.”

Within weeks, he had his first mukbang. the empanadas that he devoured in this video contained no meat, but the internet witnessed his voracious appetite for the first time. After that, in 2017, it introduced pizza and other types of fast food. Always in industrial quantities. His alarmed followers have sent him hundreds of messages, fearing he may be suffering from an eating disorder. In the video My compulsive eating (not suitable for children) he denied having a problem.

Nikocado Avocado isn’t just popular for gobbling down obscene amounts of burgers, fried chicken or spicy noodles, his favorite dish, every day. On March 15, 2017, just a month after Orlin proposed to her — he hid the ring in an XXL avocado — his YouTube channel turned into a soap opera, a shameless tabloid melodrama. That afternoon, he spoke about the problems he was having with his future husband and revealed, between two sobs, that Orlin had tried to kill himself by cutting his wrists. This video marked a turning point.

From there, he overexposed all his personal miseries with one goal: to achieve as many views as possible. Without going any further, on April 1, 2017, he declares that their relationship ended because, during a trip, he cheated on Orlin with 12 men and gave him an STD. Within two weeks, to the surprise of many, they were married. And in October, when his marriage visa was refused, he was expelled from Colombia. Given the increase in subscribers and views – and therefore his income – Nicholas decided to exploit his more histrionic and hyperbolic side. Since then, there’s been virtually no video in which he’s not crying, screaming or having a nervous breakdown. In a called Nobody loves me, I’m finished, all he does is cry over a huge bowl of fried eggs with noodles while he shaves his hair and, at the end, performs a crucifixion as a performance. Special mention goes to his countless fights with Orlin, during which both men insult and physically attack each other, rubbing food on each other’s faces. YouTube is full of compilations. They currently reside in Florida and are still married, but over these years there have been so many breakups and reconciliations that it is impossible to trace a reliable timeline of their marital whereabouts.

Given this, the million-dollar question identifies itself: what is true and what is fiction? The answer was given by Nicholas himself in an interview he gave to MEL Magazine in 2020: “Everything is scripted. YouTube was a way to build character and provide entertainment. What you see on camera is completely exaggerated to get clicks. People watch wrestling and know it’s fake. They know reality TV is fake, but that doesn’t stop them from enjoying it. I’m smart enough to know that drama sells. Orlin practiced these fake food fights, cheating tantrums, and breakups with me more and more. It doesn’t reflect our relationship in real life at all.

“I’m always two steps ahead. It has been the greatest social experience I have ever had,” he confessed to his followers on February 5. And he added: “It is exciting to witness, to observe all these beings sick, unbalanced, disoriented, wandering the internet looking for stories […] I feel like my life has settled into where I am, watching over ants in an anthill. One follows the other. It’s fascinating. Look at all these consumers, all these lost and bored people consuming whatever they are told to consume. I am the bad guy.

“The character is almost the most important thing in this type of content. Above all, to sympathize with the public and create controversy. Audiences expect to see entertainment, not food,” says Barreda. “Because it is very viral content, it generates very strong audience retention. Therefore, the advertising they produce through the platforms themselves is already a pretty big source of revenue. Many restaurants hire this type of talent to overcome challenges in their establishments and gain publicity. Although, in his case, I don’t think that’s his main income.

Indeed, this is not the case. Besides his six active YouTube channels (totalling over 7.2 million subscribers), Nicholas has a Patreon account, an Onlyfans profile, and he sells t-shirts and hoodies featuring his face. Likewise, he is one of the many celebrities who can be hired on Cameo: receiving a personalized message from him costs €139; a video call, €232.

The consequence of all this

“From a psychological perspective, this behavior could resemble that of binge eating disorder,” says Julia Vázquez, clinical neuropsychologist and researcher at the Vall d’Hebron Research Institute (VHIR) in Barcelona, in Spain. “In this disorder, the irregular occurrence of binge eating is accompanied by feelings of discomfort and lack of control. But in his case, from what we can see in the videos, these components do not seem to be present: he plans the food he will eat, the quantity or the moment. In short, the complete set. Likewise, it is also common for binge eating to occur in times of loneliness, and he often does so with a partner, either Orlin or another mukbanger. For this reason, it would not fit this diagnosis. His compulsive eating behavior, used as a show and as a way of life, would be more linked to certain personality traits and to the belief that the economic benefits compensate for the damage to his own health.

Regardless of the fact that his online dramas are wacky and involve clickbait, one thing is undeniable: he now weighs 368 pounds, or about 166 kilos. Literally 100 kilos heavier than when it debuted on YouTube. “What is clear is that if he continues this diet, he will end up having many physical and psychological problems,” Vázquez predicted. “The physical symptoms of poor diet, overweight and obesity are high blood pressure, diabetes and high cholesterol. All of this can trigger cerebrovascular problems like stroke, certain cancers, pain, mobility difficulties, and muscle, bone, or joint problems, among others.

The first health effects are already a reality. Nicholas said men’s health in 2019 that he has erection problems, “something that never happened to me until I started mukbanging”, or that “I can’t fall asleep because I feel like my digestive tract is on fire.” And as much as he minimizes the matter (one of his most recurring phrases is that he gained weight because of “water weight”), his most loyal fans are very worried. Especially since at the end of 2020 we could see him shopping at Walmart with an electric scooter for the disabled. Or, for example, when last September he shared that he broke three ribs from a severe cough.

Nicholas has been saying for some time that he will stop doing mukbangs once he turns 30. If that were the case, this retreat would take place in a few weeks. But knowing his story and how he likes to hang around left and right, there’s no sign of that happening, so no one should expect a new plot twist in this tragicomedy watched by millions.