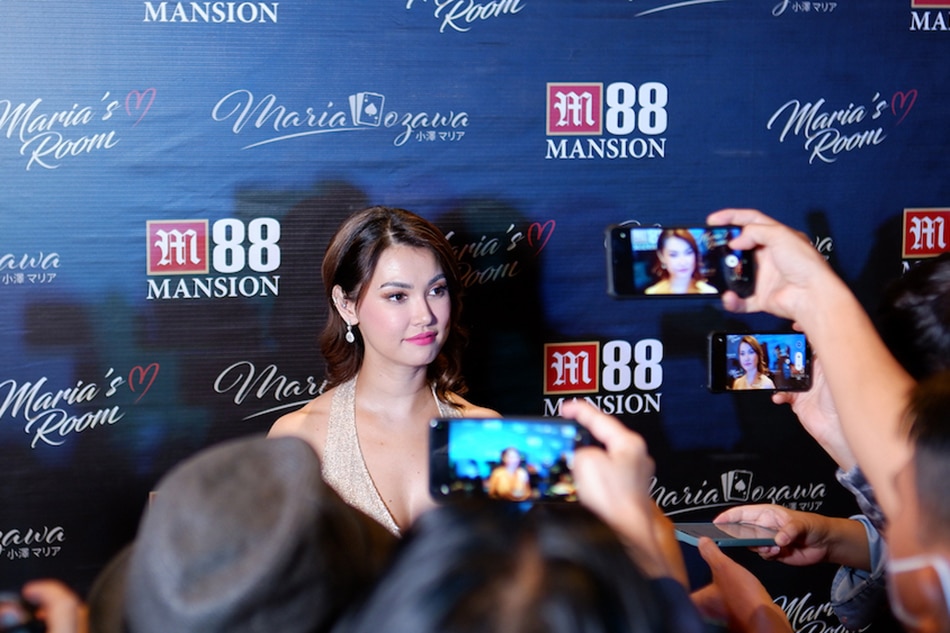 Japanese model and actress Maria Ozawa is no longer a stranger to most Filipinos. In 2015, she starred in a local film, “Nilalang”, alongside award-winning actor Cesar Montano and directed by Pedring Lopez.

That same year, Ozawa managed to make it onto FHM Philippines’ “100 Sexiest Women in the World” list, coming in at No. 16.

Ozawa considers the Philippines his second home. In fact, she expresses her desire to do another film with a local producer, anytime.

“I was so happy when I made this movie,” Ozawa told ABS-CBN News. “It was so hard to do that. It was so different from where I was from. But I’m glad I did it.”

No doubt, Ozawa loves the Philippines. She was here more than two years ago, before the pandemic started.

The very personable and accommodating Ozawa was back in the country for a one-night-only event to launch “Maria’s Room”, an online portal that features popular casino games – a collaboration with gaming entertainment platform, M88 Mansion.

“Maria’s Room” had a soft launch last February, and the game site has seen significant success. According to M88 Mansion Creative Director Carlos Lopez, “Maria’s Room” continues to grow in all target markets in the Southeast Asian region.

“Everything is really new from now on,” Ozawa said during the media launch of his dedicated gaming portal. “It would be nice if we could expand ‘Maria’s Room’ in the future and that will be a challenge for us.”

Admittedly, Ozawa initially didn’t know what to do after he was offered to create the casino gaming portal to bear his name.

“Seriously, who wouldn’t say yes to this offer?” she said of the exciting new partnership. “I just trusted my partners and took the opportunity.

“After talking to them, I was very convinced that it was a good project for me. I’m just happy that ‘Maria’s Room’ is finally here.

Meanwhile, Lopez couldn’t be happier with the “good reception and overwhelming support” from global audiences online to “Maria’s Room,” as well as their celebrity partner, Ozawa.

“May they be with us continually as we grow the business and complete more projects with Maria,” Lopez said. “Maria’s Room continues to grow and continues to grow. It’s a great partnership.”

One of the goals of the event is to show off Ozawa’s exclusive “Maria’s Room” workout kits that she previously only shared via her vlogs.

The videos were inspired by the fact that Ozawa is passionate about health and fitness, as seen in her special segment called “Monday Mornings with Maria” on her Facebook and YouTube channel.

“I want to express how grateful I am for the continued support, trust and confidence I receive from one of Asia’s most recognizable and established online casinos – M88 Mansion,” Ozawa said. .

“It was my first time partnering with a video game company and I’m really excited about Maria’s Room because it showcases my personality in a new light. It definitely reflects my fun side.

The portal guarantees excellent games for players. They can enjoy a bikini night with sexy ladies playing beach volleyball, get excited playing soccer with “Football Baby” or party the night away on the video slot “Ladies Nite 2 Turn Wild” .