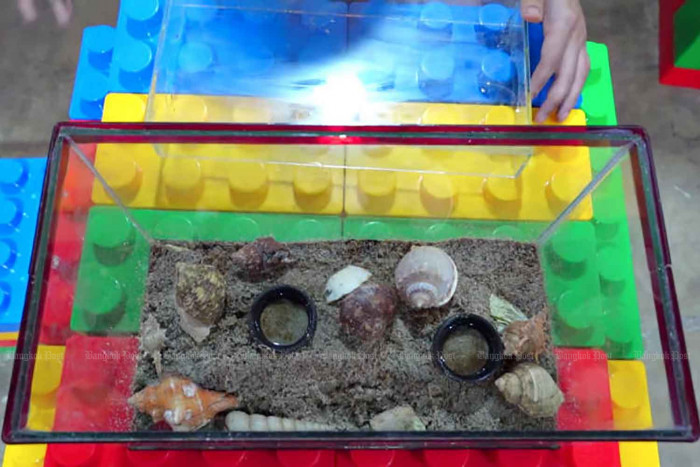 The screenshot shows hermit crabs in captivity in a music video by Korn “Oaujun” Khunatipapisiri posted on Wednesday.

Natural Resources and Environment Minister Varawut Silpa-archa said he would launch an investigation against a popular YouTuber who posted a video clip of himself catching a number of hermit crabs and bringing them home to keep them.

The Minister joined the call from some netizens asking Korn “Oaujun” Khunatipapisiri to return the crabs to their natural habitat, prompting Mr. Korn to apologize and promise to return the sea animals to where he had collected them.

In a post on his Facebook page, Mr Varawut even urged sponsors and fans to boycott Mr Korn for what the minister described as an action likely to influence young people. He said the YouTuber who has around 700,000 subscribers should have been more conscientious as he was setting a bad example.

The minister said he was alerted to the video by two Facebook pages, Happy Nancy and Monsoon Garbage Thailand.

A number of Monsoon Garbage Thailand followers also posted their comments against Mr Korn on his video and called on him to bring hermit crabs back into the wild.

Although hermit crabs are not listed as a protected species, if Mr Korn is found to have collected the crabs from a national park, he will face legal action, Mr Varawut said .

An investigation would then be carried out to find out where Mr Korn had retrieved the crabs from, he said.